No Frontline Fellowship publication has engendered more controversy, and been in more demand worldwide, than: Slavery, Terrorism and Islam – The Historical Roots and Contemporary Threat. The first 3 editions and 5 printings sold out so fast that we were almost continually out-of-stock. The first edition earned Dr. Peter Hammond a Muslim death threat Fatwa, and Amazon.com began offering second hand copies of the hard-to-find book for hundreds and then thousands of dollars a copy! It was clear that we needed to re-print, but Peter was determined to thoroughly revise, expand and produce a more reader-friendly copy with larger typestyle and bigger pictures.

This 3rd edition of Slavery, Terrorism and Islam was finally delivered to Xulon Press in November 2010. We have just received the first copies of this edition. This 3rd edition is now three times the size of the first edition and promises to be one of our most successful publications, both in terms of educating and alerting Christians as to the dangers of Islam and mobilising Christians in effective evangelism of Muslims.

Dr. Peter Hammond’s bestselling book:  SLAVERY, TERRORISM & ISLAM - The Historical Roots and Contemporary Threat is a fascinating, well illustrated and thoroughly documented response to the relentless anti-Christian propaganda that has been generated by Muslim and Marxist groups and by Hollywood film makers.  As Karl Marx declared:  “The first battlefield is the re-writing of History!”

Slavery, Terrorism and Islam was first published in 2005 and quickly sold out.  It earned Dr. Peter Hammond a death threat “Fatwa” from some Islamic radicals.  We have included the story of that in an appendix of this book.

The demand for the Slavery, Terrorism and Islam book was so intense that Amazon.com advertised secondhand copies of STI for US$92 plus postage!  This fourth edition consists of 290 pages, over 200 pictures, maps and charts.  This new edition includes new pictures and expanded chapters on Women in Islam, and new chapters include: The Crusades and Jihad, Muslim Evangelism in Universities, Churchill on Islam, Islamic Attacks on Christ and the Bible, The Battle Over History and The End of Islam.

This is now the fourth edition of this best selling book and the second to be published in America.

Even though we have greatly increased the content, size of, and number of chapters in the book we have kept costs down so that we can offer these books at just US$15 each.

It is our earnest prayer that the Lord will use this book to alert Christians to the real threats, the urgent needs and unprecedented opportunities before us to reach Muslims with the life-changing Gospel of our Lord Christ.  May God be pleased to inspire, energize and equip us to fulfill the Great Commission of our Lord Jesus Christ in Muslim communities, in our neighbourhoods, and throughout the Middle East and the 10-40 Window.

Whatever you can do to help us make this book, and the complementary Muslim Evangelism Workshop audio-CDs and MP3, better known and more widely available will be greatly appreciated.

Slavery, Terrorism & Islam sets the record straight with chapters on “Muhammad, the Caliphas and Jihad”, “The Oppression of Women in Islam”, “The Sources of Islam” and "Slavery the Rest of the Story".  With over 200 pictures, maps and charts, this book is richly illustrated.  It consists of 16 chapters and 13 very helpful appendixes including demographic maps of the spread of Islam, a Glossary of Islamic Terms, a comparison of Muslim nations’ military spending vs. their national prosperity, a chart on how Jihad works depending on the percentage of Muslims in the population and guidelines for Muslim evangelism.

"Peter has ministered in these areas and has firsthand knowledge not just of slavery but of torture and terrorism. As he shows so clearly in the book, these atrocities are part of the very fabric of Islam. This short book is a wonderful overview with a very comprehensive guide to how to witness to Muslims. This book is highly recommended."  Dr. Ted Baehr, Movieguide

“The conflict between Islam and the rest of the world may dominate the headlines, define our foreign policy, and give new urgency to the day-to-day mission of our churches, but why that is the case is still not very well understood. It is for that reason that Frontline Fellowship has produced this vital new study of one of the most neglected aspects of Islam.  Born out of the difficult experiences of missionaries on the front lines of the battle for the soul of Africa, this book is designed to equip ordinary Christians from every walk of life to wisely and scripturally minister in a world where the conflict between Islam and civilization is all too obvious.” Dr. George Grant, Kings Meadow

"Peter knows first hand the nature of the enemy the West is facing and exposes it brilliantly in his book in Islam. He begins by documenting the close relationship between Islam and slavery and then chapter by chapter reveals the terrible cost of thirteen centuries of Islamic invasion, conquest and brutalization. This is a book that every Christian should read and pass along to friends; and one that every home-schooling family should require as part of their children’s curriculum." Dr. Brian M. Abshire, International Institute for Christian Culture

"Dr. Peter Hammond cuts through layers of misinformation and uncovers astonishing historical facts and details long buried by Islamic revisionists. You’ll find out their real agenda for tomorrow by discovering what they actually did yesterday – plus a field-tested plan of how to win Muslims to Christ." Rev. Bill Bathman, Chairman of the Board of Frontline Fellowship

“’Slavery, Terrorism and Islam’ is a well-researched account of historical events that impact directly on present developments. For the sake of this generation, and coming ones, someone had to do what Dr. Peter Hammond has just done; setting the record straight on the different role players in the slave trade.” Rev. Fano Sibisi, KwaSizabantu Mission

The new, expanded third edition of Slavery, Terrorism and Islam – the Historical Roots and Contemporary Threat received much interest and positive responses, from as far afield as Alaska and the Middle East.  A message from a Christian in a Middle Eastern country says their government blocks access to our www.frontline.org.za website.  However he accesses it whenever he is out of the country.

A Christian in a Middle Eastern country wrote:

“It’s silent heroes like you that inspire us to push the envelope in our Christian walk.  Its men like you that are indeed true to the Word of God.  Unfortunately, much of the Gospel preached centres around health, wealth and prosperity so that evangelism such as you engage in is the remotest thing on the mind of many Christians.”

Another man who had obtained a copy of Slavery, Terrorism and Islam wrote to us: “It is a fascinating volume that transmits the strategic tone of what is unfolding in Africa and you clearly communicate the implications should this opposing belief system prevail.”

One review from an American authority states: “Slavery, Terrorism and Islam is an invaluable desk reference and primer for analysts addressing Islam as an ideological force…although written from a Christian missionary perspective, the text is useful for secular analysts researching a civilisational force on the march.  Unlike the academics who debate that a clash of civilisations is even in progress, Hammond writes from the perspective of one decisively engaged in that civilisational fight…there is abundant material for secular researchers dissecting an aggressive ideology.” 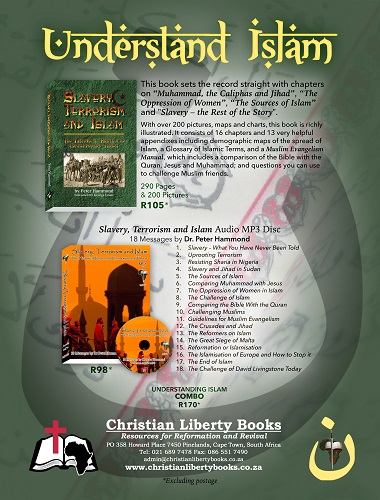 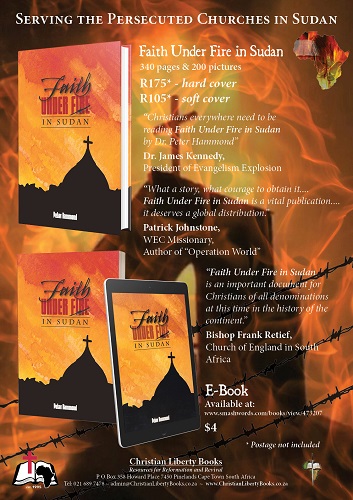 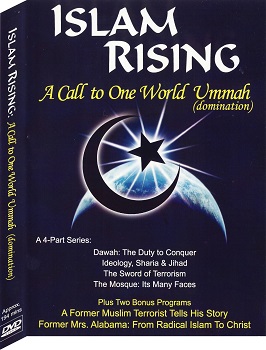 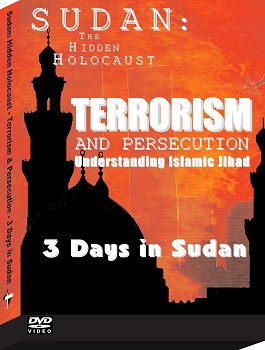 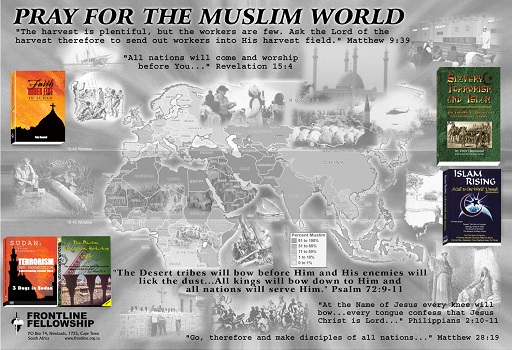