South Africa has become more ‘pornified’ than anyone could have predicted; kids are not only viewing porn, now they’re brazenly imitating its brutality by filming their ‘exploits’, even gang rapes, and then spreading their videos via social media. Research conducted by the SA Film and Publications Board (2006) found that 64% of children surveyed have seen pornographic images on the Internet. In a ground-breaking move, England’s Prime Minister David Cameron recently announced that all Internet Service Providers in the UK will be blocking pornography on their users’ Internet services. This could happen in South Africa too, but not without you putting up a fight. What can you do to protect yourself and your children? How can we take back the culture from the pimps and pornographers? Porndemic will equip and empower you, with the help of God, to make a positive difference.

Over 11 years ago, Christine Mc Cafferty started working on an update of Dr. Peter Hammond’s very successful booklet Finding Freedom from the Pornography Plague, first published in 1991, later expanded in 1994. Over 10 000 copies of these two editions were completely sold out. Finding Freedom from the Pornography Plague helped to launch a country-wide grassroots campaign to remove pornographic magazines from supermarkets and other retail shops. Over 9 000 stores were persuaded to no longer stock pornography and Scope and Playboy magazines soon went bankrupt.

Expanded and Updated
Christine ended up focusing on another urgent attack on the family by writing The Pink Agenda - Sexual Revolution and the Ruin of the Family. Taryn Hodgson has now expanded, updated and completed this important project, which exposes how the pornography plague affects you and equips you, your family and community to fight back.

Mobilising Community Leaders, Pastors, Teachers and Parents
We need to get this book into the hands of Members of Parliament, Municipal councillors, pastors, teachers and parents across the country. We also have an opportunity to meet with the Minister of Home Affairs in Zambia and Malawi, to warn them of the plague that will be unleashed in their countries if they do not put measures in place to block pornography on the Internet on a country-wide level. (Pornography is currently illegal in Zambia and Malawi).

Endorsements
“Every responsible adult, mother, father, grandparent, teacher, principal and pastor should read and own a copy of this book. The plague of pornography must be stopped, but can only be done through Biblical advocacy, education and a call to holiness. We must preserve the future generations and fight this insidious evil – accurate knowledge is critical if we are to be taken seriously.” Erin Georgiou, Editor – JOY! Magazine

“At Focus on the Family, we encourage Christians and churches to begin talking about the harms of pornography and sexualized media and to proclaim the beautiful message of God's design for sexuality. This book is a wonderful tool that can be used powerfully to affect change in this regard. With specific focus and information relevant to this country, I would encourage every Christian leader in South Africa to have a copy.” Graeme Schnell – CEO, Focus on the Family Africa

"Porndemic is a must read book that will expose the fruitless works of the lust of the eyes through pornography and help people of faith to remove the blight of pornography from their lives and the culture at large. I urge everyone who cares to read it." Ted Baehr, President – Movieguide and Christian Film and Television Commission, USA

"We need to understand the times we are living in and take decisive action against the pornography plague in our own lives and in our communities. If we do not put an end to it, it will end us." Rev. Erlo Stegen, Director of KwaSizabantu Mission.

Exposed
It’s not a question of if you and your children will be exposed to pornography, but when. Research conducted by the SA Film and Publications Board (2006) found that 64% of children surveyed have seen pornographic images on the Internet. Considering the easily accessible and prevalent pornified content on TV, mobile phones, the Internet and magazines, you and your children are at a high risk of becoming addicted. In fact, someone you love may already be hooked, but you may not know it yet because most users can easily keep their viewing habits a secret.

This could happen in South Africa too, but not without you getting involved and putting up a fight.

This is a winnable war. What is the Biblical antidote to the porndemic? And what can you do to protect yourself and your family? How can we take back the culture from the pimps and pornographers? Africa Christian Action’s new book Porndemic will equip you, with the help of God, to begin to transform your community.

Help us get this vital book into the hands of teachers, parents, pastors, members of parliament and town councillors.

Porndemic also includes useful addresses, websites and other recommended resources to protect you and your family and empower your congregation to transform your community.

May God be pleased to use this book to strengthen His people, to set captives free and to mobilise local churches to make an impact on cultures and communities. 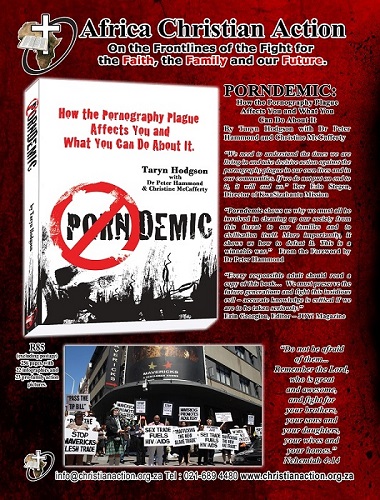 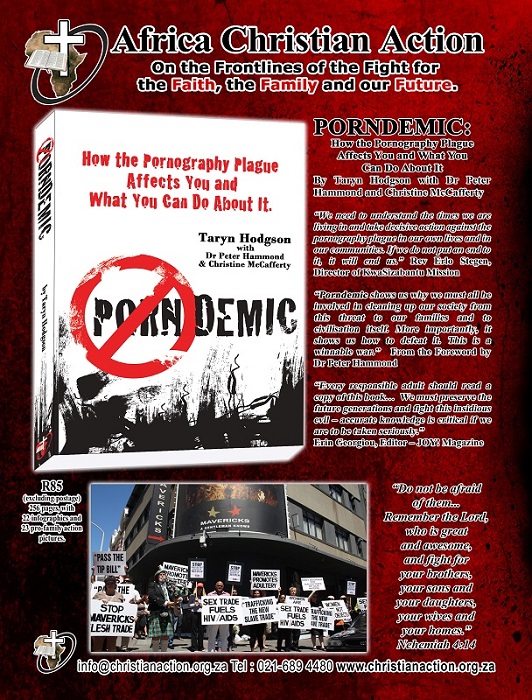