3 FILMS ON SUDAN ON ONE DVD

Jeremiah Films powerful documentary, based on the best-selling book “Faith Under Fire in Sudan” by Dr. Peter Hammond. Carefully crafted by Pat Matrishiana from over a hundred hours of video and film footage, this “Persecution Project” video takes you into the frontline and behind the enemy line in the colossal conflict which claimed over 2 million lives.

Starting with the shocking and most incredible footage on the September 11th terrorist attacks on America, the video courageously exposes the ideology and issues behind the attacks. It also takes you behind the line to the colossal conflict in Southern Sudan and the Nuba Mountains showing how Christians there have resiliently been resisting Islamic Jihad for decades.

3 Days in Sudan is a unique video that takes you into the frontline of the longest war of the 20th Century, the bombing of the hospital and Cathedral in Lui and preaching under fire at the battlefront. 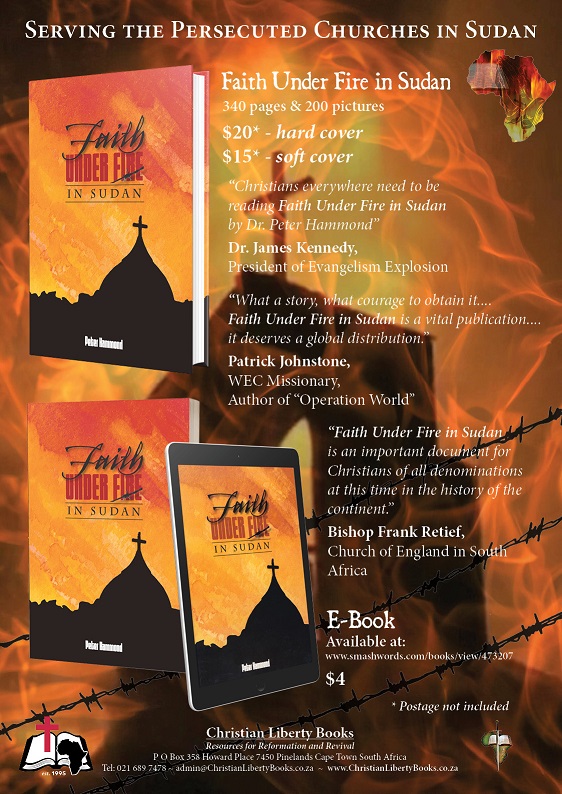 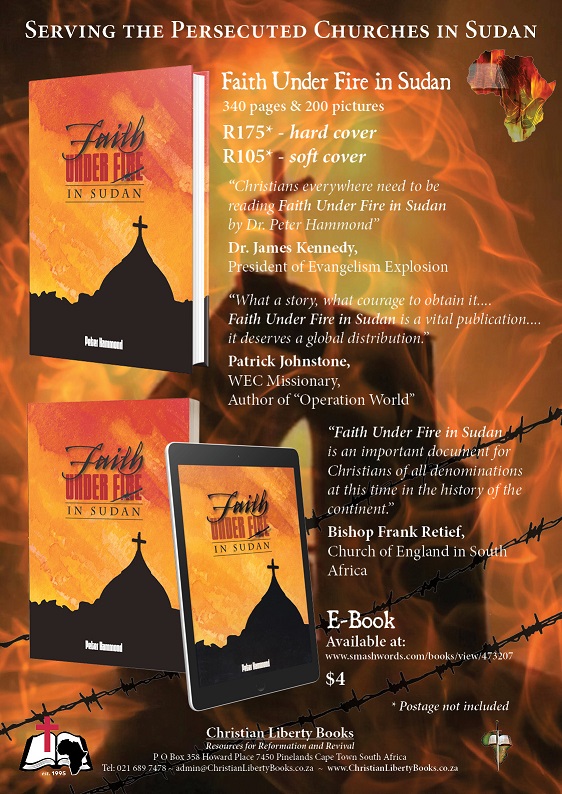 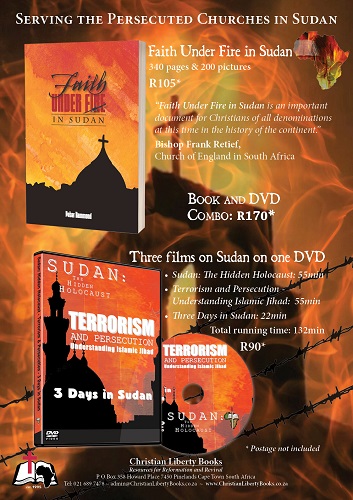 URGENT CALL FOR PRAYER for CHRISTIANS UNDER FIRE IN AFRICA


War Between Sudan and South Sudan

President Salva Kiir of South Sudan has warned that Sudan has effectively declared war against the newly Independent South Sudan. The Sudan Air Force has bombed targets inside South Sudan. Land-locked South Sudan stopped pumping oil through Sudan in January. In view of the government of Sudan in Khartoum failing to pay the hundreds-of-millions of Dollars of oil revenue due to South Sudan, they had no other option than to withhold oil from the North.

The Khartoum government responded by bombing oil fields in the South. South Sudan is planning to build a pipeline through to the Kenyan coast and another through Ethiopia, to Djibouti on the Red Sea. Both projects are intended to make South Sudan independent of Sudan’s fuel infrastructure and processing plants. Other flash points in this escalating conflict are oil-rich regions which are in disputed territory, claimed by both the South and the North. The National Islamic Front government of Sudan has waged ethnic cleansing in oil-rich areas such as Abyei and Heglig. Heglig, one of South Sudan’s main sources of income, has had its oil processing plant destroyed by Sudan Air Force bombings.

Reportedly the Sudanese army has crossed into South Sudan with tanks and artillery. Reports have been received of Sudan Air Force MiG-29 jets bombing targets in the Bentiu region of South Sudan. The marketplace in Rubkona, near Heglig was rocketed. Sudanese Commander, General Kamal Abdul Maarouf, boasted to Reuters that his army had killed over 1,200 South Sudanese in these latest clashes. The dictator of Sudan, Omar Al Bashir, has vowed to teach South Sudan "a final lesson by force". Muslim mobs have burned churches in the North.

Congregations in Northern Nigeria continue to be attacked by Islamic Jihadists. On Sunday, 29 April, a congregation which met at Bayero University in the Northern city of Kano, came under violent attack. Terrorists hurtled bombs and opened fire with machine guns killing at least 20 Christians. Eye-witnesses reported that the attackers arrived in a car and on two motorcycles. They first attacked an open-air service outside the Faculty of Medicine. They then attacked another church service taking place inside the sports complex. Boko Haram has claimed responsibility for scores of recent bombings and machine gunning of congregations throughout Northern Nigeria. Boko Haram has claimed over 1,000 lives since 2009. Boko Haram claims to be fighting for an Islamic state in Nigeria.

During this time of escalating violence against Christians throughout the Middle East, it is absolutely essential that Christians understand the nature of radical Islam. The best books to enable you to understand the threat of Islamic Jihad and how Christians are impacted are: Slavery, Terrorism and Islam - The Historical Roots and Contemporary Threat and Faith Under Fire in Sudan. No Frontline Fellowship publication has engendered more controversy, and been in more demand worldwide, than Slavery, Terrorism and Islam. The first three editions and five printings sold out so fast that we were almost continually out of stock. Slavery, Terrorism and Islam earned me a Muslim death threat Fatwa and Amazon.com began offering second hand copies of the hard-to-find book for hundreds and then thousands of dollars a copy! With over 200 pictures, maps and charts, this 290 page book is well-illustrated. The third edition of Faith Under Fire in Sudan is 320 pages, with over 200 pictures.

Frontline Fellowship took in the Jeremiah Films crew who produced Sudan: The Hidden Holocaust and Terrorism and Persecution - Understanding Islamic Jihad. Both of these landmark films and an additional one produced by a secular war correspondent, who experienced a bombing at a Frontline church service, are available on one DVD boxset.

These three films on Sudan, along with the four part series Islam Rising, are the very best expose on radical Islam. Every congregation should be shown these films. They are ideal for mid-week services. A Church is called to be a House of Prayer for all nations, and to remember the persecuted. These books and films will enable your congregation to do just that, effectively.

Our Audio Visual department has now produced a much expanded Muslim Evangelism Workshop MP3 Boxset which includes: Comparing the Quran with the Bible; Understanding the Challenge of Islam; Uprooting Terrorism; Slavery and Jihad in Sudan; Slavery - The Rest of the Story; Guidelines for Evangelising Muslims; Challenging Muslims; The Gospel and Abraham; The Challenge of Islam according to the Reformers; Women in Islam; The End of Islam; Reformation or Islamisation; Revival Amidst Persecution in Sudan; Understanding the Crusades; The Crusades and Jihad; The Great Siege of Malta; Dealing with Guilt Manipulation; Faith Under Fire in Sudan; What is Going on in the Middle East? and Muslim Evangelism.

It is our earnest prayer that the Lord will use these books, DVDs and Audio MP3 Muslim Evangelism Workshop to alert Christians to the real threats, the urgent needs and unprecedented opportunities before us, to reach Muslims with the life-changing Gospel of our Lord Jesus Christ. May God be pleased to inspire, energise, and equip us to fulfil the Great Commission of our Lord Jesus Christ in Muslim communities, in our neighbourhoods and throughout the Middle East and the 10/40 Window.

“What a story, what courage to obtain it, what determination it displays about the Sudanese Christians who do not succumb to Islam in its cruelest and worst manifestation in the world today! Would what Christians around the world were to read this sobering account and support our brothers and sisters in the Faith in prayer, publicity and practical help… Faith Under Fire in Sudan is a vital publication … it deserves a global distribution.”

Frontline Fellowship’s best selling book on Africa’s forgotten war is available again.  This new, much expanded and thoroughly revised third edition is 320 pages and includes over 200 pictures and maps.  Faith Under Fire takes you behind the lines of one of the longest wars of recent years, and introduces you to the unforgettable Christian heroes of this colossal conflict.

“Christians everywhere need to be reading Faith Under Fire in Sudan, by Dr. Peter Hammond.”

author of “What if Jesus had Never Been Born?”, USA

“Faith Under Fire in Sudan is the most important and well documented book I have ever read on Sudan... It is a book that cannot be ignored.” -    Dr. Paul Negrut, Pastor, Emmanuel Baptist Church, Oradea, Romania

“Congratulations on your book on Sudan! God is using it both to raise awareness and to generate prayer.”

”Peter Hammond’s Faith Under Fire in Sudan is a thrilling account of the power of the Christian Gospel to make Christ’s little ones into heroes. Especially Christians in the West need to read this book and to note its message.”

“Faith Under Fire in Sudan is an important document for Christians of all denominations at this time n the history of our continent... Peter Hammond has done us all a service in focusing our eyes on the Sudan. This long neglected area requires our urgent attention.”

”This book is part of an extraordinary effort to publicize the perilous plight of persecuted Christians in Sudan, and to mobilize international pressure against the persecutors.”