GOING THROUGH – Even If the Door is Closed

Also available as an E-book

Going Through – Even If the Door is Closed takes you on an exciting adventure of Missionary exploits in Europe during the dramatic events of the Cold War.

In this superficial age of short term religious tourism, Going Through comes as an invigorating tonic - showing what real Missions are all about. Bill and Harriett Bathman have clearly demonstrated what wholehearted, lifelong commitment is all about. While this adventure of discipleship begins with a Summer outreach - it does not stop there. For over 60 years the Bathmans have given everything they have into the cause of Evangelism, and serving the persecuted Church. They immersed themselves into the lives of the people amongst whom they were called to serve. They were 22 years into their ministry in Europe before they took their first furlough. They show us what it means to "endure hardship," "stand firm to the end" and "persevere under trial."

In Missions, obstacles abound. Disappointments, dangers, difficulties and discouragements are occupational hazards of cross cultural missions. Missionaries need to know that they are called of God and they need to persevere in that call - willingly enduring hardships, discomfort, opposition and worse. As Going Through so powerfully illustrates: Sacrificial service is more eloquent than many sermons.

Behind the Iron Curtain

When I have been privileged to accompany my Father-in-law, Rev. Bill Bathman, on missions to Eastern Europe (both before and after the Iron Curtain collapsed) – was struck by how much the people there love him. In Poland, Czechoslovakia, Yugoslavia, Bulgaria and Romania, it was inspiring to see with what overwhelming joy he was welcomed by the pastors, and to see the sea of devoted, shining faces of the members of each congregation as they stood or sat in rapt attention, riveted and hanging on every word of their beloved "Brother Bill."

When the Needs Were the Greatest

Time and again, the precious believers in Eastern Europe eagerly related to me how Bill Bathman had been the first Christian from the West to visit them, how he had visited them the most, stayed the longest, given the most, and had come back again and again. He came through when their need was the greatest, during the darkest years, when it was the most dangerous, when few others seemed to care or to dare - Bill Bathman was there for them.

Rev. Bill Bathman is a world class preacher, but you could never compare his preaching in the West with the incredibly anointed ministry God poured through him in Eastern Europe. Leaders in Romania attributed the outbreak of Revival in Romania to God's gracious working through Bill Bathman during a particularly powerful series of sermons delivered in January 1983 for a special crusade in Oradea.

It often seems that modern missionary volunteers just want to dabble in missions - for the experience. Going Through presents an inspiring example of dedicated discipleship and serious service, not splashing in the shallows - but delving into the deep. Spiritually speaking, Missions need long-distance marathon runners - not short distance sprinters.

"Therefore, since we are surrounded by such a cloud of witnesses, let us throw off everything that hinders and the sin that so easily entangles and let us run with perseverance the race marked out for us." Hebrews 12:1.

"To travel with Bill Bathman was an experience, an adventure, danger, intrigue and spiritual ministry all tied into one. He knew no fear, he walked into the lion's den like Daniel, trusting God. Bill and Harriett will live long in my memory as a couple who were committed to sharing the only Good News that really matters - Jesus Christ and His love for a lost world. You're in for a great adventure in reading this book." - Rev. Guy A. Davidson, Pastor, Arizona Community Church, Tempe, Arizona.

"Bill invited me to accompany him to Eastern Europe in the late 1980s, well before the violent collapse of communism, and my encounter with God's people in Romania was mine-bending, soul-shaking, and life-changing - in just a few days. You are holding in your hand a treasure of the Twentieth Century, a chronicle of decades of Book-of-Acts-like experiences in the life of a singularly dedicated man of God." - Dr. Gary D. Kinnaman, Pastor and author. Word of Grace Church, Mesa, Arizona.

"There have been few experiences that have affected my life as much as the trips that I have taken with Bill Bathman into Eastern Europe during the days of communist control. I saw doors, that I thought were closed to the Gospel, crack open. I had fellowship with believers who had to count the cost of following Christ. I experienced the marvellous hand of the Lord in protection, guidance and blessing as I travelled into those Eastern Europe countries. My life has never been the same since those trips." - Dr. Don Engram, Pastor, Palmcroft Baptist Church, Phoenix, Arizona.

"Bill and Harriett Bathman are people that God has quickly used. Their stories about what happened behind closed doors gives us both a deep appreciation for the way God did the "impossible" for them and encourages us to trust God even if it seems to us the door is closed."

"I have known Bill and Harriett Bathman for over 40 years. It has been my privilege to accompany Bill in ten countries and to drive over 1,000 miles into the Communist world in the late 70s, when its iron grip was at its tightest. I have been with him when delivering money, medicine, medical equipment and visiting persecuted believers. I know Bill to be a man of integrity, compassion and one who, in the ultimate sense of the term, has lived his life to magnify the Lord Jesus Christ. You will be blessed by this book." - Dr. William T. (Bill) Monroe, Pastor, Florence Baptist Temple, Florence, SC.

A Passion to Serve Christ

"To accompany Bill Bathman on trips into Eastern Europe is without question on of the greatest highlights of my life. Now you have the opportunity to "travel" with Bill as he highlights God's story over the past five decades. You'll catch his passion to serve Christ, `Even if the Door is Closed.'"

"I travelled with Bill Bathman into the Eastern bloc countries to visit the persecuted church in the spring of 1981. My life as a pastor was radically changed by that brief visit. I came back home and gave myself to the task of equipping the body of Christ." - Dr. Darrell L. Farney, Faith Evangelical Free Church, Milford, Ohio.

"I've travelled thousands of miles by car with Bill Bathman in Eastern Europe and I have felt like Timothy did with Paul. The experience has radically changed my life and my vision for the mission field." - Don Christensen, National partner with Ron Blue & Co.

What it Takes to be an Effective Missionary

This book also demonstrates the importance of training. Too many volunteers for Missions seem to want to take the short cut, bypassing training. Bill Bathman relates the importance both of formal Theological training at college and apprenticeship under an experienced Evangelist in the field. Even more important, Going Through emphasises the vital necessity of asking lots of questions, listening to and learning from the people to whom you're sent to minister. Most important of all how we need to be sensitive to the Lord's leading.

"He guides the humble in what is right and teaches them His way." Psalm 25:9.

"Whether you turn to the right or to the left, your ears will hear a voice behind you, saying "This is the way; walk in it.'" Isaiah 30:21.

Click here to purchase Going Through – Even If the Door is Closed online,

Also available by the same author: Going On, Putting Feet to Your Faith and How'd you hurt your hand? 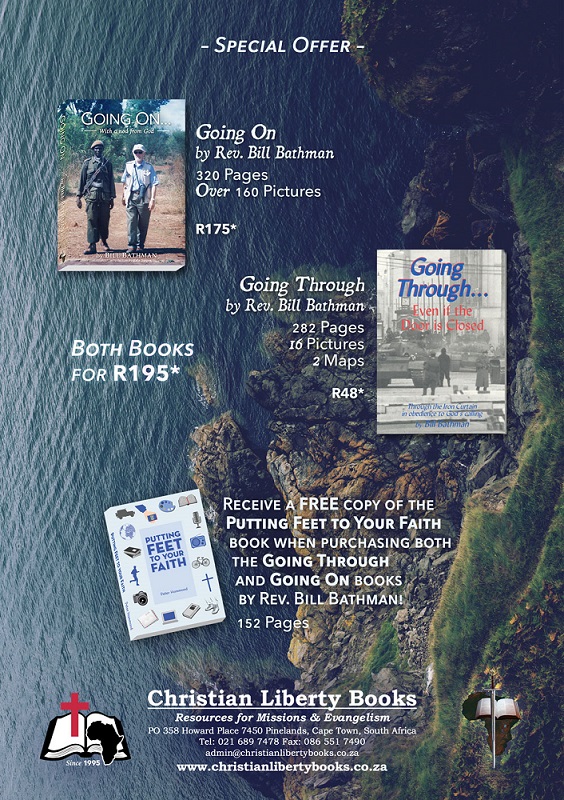