On 6th April 1994, one of the most dreadful campaigns of mass murder was unleashed upon the Tutsi people of Rwanda. In just 100 days, more people had been slaughtered with machetes and clubs than had died from atomic weapons in all of history. The horrific massacres in homes, hospitals, churches and on the streets, are documented with shocking photographs in Holocaust in Rwanda.

More importantly, the author, Dr. Peter Hammond, relates the events leading up to the intense and widespread violence and documents the reasons why this systematic slaughter was unleashed.

Missionary, Peter Hammond, also examines the disgraceful involvement of liberal church leaders, gun control, media manipulation, the French and US governments and the United Nations in the crisis.

Most importantly, the lessons we need to learn from the genocide in Rwanda are clearly and courageously presented.

The Hutu Holocaust (taken from http://www.frontline.org.za/index.php?option=com_multicategories&view=article&id=985:africa-the-challenge&catid=24:political-social-issues-cat)

Unlike the genocide in Sudan, the holocaust in Rwanda has been widely reported. However, the anti-Christian aspect of the Hutu mobs seems to have been generally ignored. So too has the influence of witchcraft, Marxism and Islam in fermenting the Hutu hatred.

What has also now been discovered is that the massacres had been planned for months in advance. The Presidential Guard and other elements of the majority Hutu army had since 1992 been training members of the political party militias, the lnterahamwe (those who attack as one), how to kill large numbers of the minority Tutsi most efficiently. The lnterahamwe were part of the MRND party of the late president Juvenal Habyarimana. These militia were then armed by the Army.

Last year a private radio station, des Milles Collines, owned by members of Habyarimana’s inner circle, began a campaign of hate-filled propaganda against the minority Tutsi people. By the end of 1993 these broadcasts became more virulent and targeted specific individuals who were named as “traitors” and “enemies” who “deserved to die.” Throughout the weeks of mass murder the radio incited the Hutu listeners to genocide, encouraging them to “fill the half-empty graves” with Tutsi men, women and children. By the time the Tutsi dominated Rwandan Patriotic Front had chased the Hutu military and militia out of Rwanda, about 500 000 people had been killed. By then 2 million Hutu had fled the country, many in response to the radio urging all Hutu to escape.

Another shocking aspect of this time of madness was that smaller scale trial run genocidal campaigns were practised in Rwanda in October 1990, January-February 1991, March 1992 and December 1992 - February 1993. In those localised mass-murder sprees the Habyarimana MRND government and militia killed thousands of Tutsi and learned valuable lessons in how to organise a nation-wide holocaust. The reactions (or the lack of them) of the international community to these atrocities were also carefully monitored.

When the Presidential Guard and the lnterahamwe launched their “final solution” on 6 April 1994 they concentrated on the capital, Kigali. Within a week 20 000 people had been murdered. The international community responded by evacuating foreign nationals. Encouraged by this retreat the Hutu leaders then expanded their genocide campaign throughout the country.

For the first two weeks of the slaughter the province of Butare remained calm and free from violence. The Hutu and Tutsi had lived peacefully together in Butare for centuries. Then on 19 April the Tutsi governor Jean-Baptiste Habyolimana, was removed and units of the Presidential Guard flew into the Butare airport. The massacres then began immediately. Huge pits were dug and filled with burning tyres. Thousands of people were then systematically thrown (generally alive) into the burning pits. The killings continued day and night for the next three days. A dense network of road blocks were set up to catch any fleeing survivors.

During this incredible campaign of cold blooded mass murder the international community failed to act decisively. Had the 2500 UN troops in Rwanda taken prompt and firm action to suppress the initial violence, the entire holocaust might have been prevented. Instead, on April 21, the UN Security Council refused to admit that genocide against the Tutsi was taking place. They voted instead to withdraw the majority of the UNAMIR force.

By mid-May the UN High Commissioner for Human Rights undertook a fact-finding tour of Rwanda and Burundi. In his report he condemned the violence but failed to identify either the culprits or the primary victims. Neither did he describe the killings as genocide. At a June 22 Security Council meeting the UN was still unwilling to recognise what the Hutu MRND government was guilty of. Instead they supported the unilateral intervention by France into Rwanda.

For many years, France supported the Habyarimana regime. French troops even assisted the Rwandan army in their campaigns against the RPF in October 1990 and again in February 1993. France continued to strongly support the Rwandan army through the genocide of April/May 1994. Many Rwandans see the French intervention as a rescue mission for the Rwandan army and MRND militia. In effect, the French army has actually been protecting the killers from receiving justice at the hands of the RPF.

As one relief aid worker in Zaire has said:
“All the criminals are now in these refugee camps. Casting these refugees purely as victims reflects a lack of moral memory. These are the people responsible for most of the murders.” Even in the refugee camps the hatred continues with Hutu mobs attacking Tutsis and beating them to death.

“Their mouths are full of cursing and bitterness. Their feet are swift to shed blood; ruin
and misery mark their ways, and the way of peace they do not know. There is no
fear of God before their eyes.” Romans 3:14-18

THE HOLOCAUST IN RWANDA

Twenty-three years ago, 6 April 1994, one of the most dreadful campaigns of mass murder was unleashed upon the Tutsi people of Rwanda.

In just 100 days, more people had been slaughtered with machetes and clubs than have died from atomic weapons in all of history.

At the time, world media attention was focused on South Africa's first "One Man, One Vote" elections. When the genocide was launched on 6 April 1994, most African correspondents were in South Africa covering the elections. The MRND government in Rwanda meticulously organised the genocide. The French Trained Presidential Guard, the army, the gendarmes and civil administrators were mobilised to slaughter the Tutsi minority.


Sowing Confusion
Central to the MRND strategy was to sow confusion so that no one would know what was happening. They isolated their victims by imposing a news blackout, cutting telephone links, establishing a dense network of roadblocks and imposing a nationwide curfew. These measures kept people in their homes and prevented most people from fleeing. By cutting communications and restricting travel, they isolated their victims and sought to stifle the flow of news.


State Sponsored Genocide
Following the assassination of the president, by surface to air missile, the MRND government (Mouvement Revolutionnaire National pour le Development) launched a campaign of disinformation. It portrayed the killings as a spontaneous outbreak of tribal violence. It sought to confuse the mass killing of defenceless people with "the war", and it played the humanitarian card by pleading for emergency aid. All this was a smoke screen to conceal the state sponsored genocide. Amidst this calculated confusion, many foreign aid workers assisted in the disinformation campaign by contributing ill-informed comments such as: "Everyone is killing everyone!"; "It's uncontrollable violence"; "The Hutus and Tutsis are killing one another again!"

Spread of Disinformation
Having killed opposition politicians, Rwandese journalists, human rights activists and others who might present an accurate report on the cold-blooded campaign of mass murder, the MRND campaign continued their strategy of disinformation by portraying the violence as spontaneous rage in response to the assassination of the president.


Massacres Exposed
This strategy of disinformation and terror was spectacularly successful. To this day, most people worldwide do not understand what happened in Rwanda or why it happened. That is why after my mission to

Rwanda I was compelled to produce a compact book that would not only expose what had happened in the horrific massacres in homes, hospitals, churches and on the streets, but the reasons why this systematic slaughter was unleashed. Holocaust reveals the events leading up to the intense and widespread violence, and more importantly the lessons we need to learn from the genocide in Rwanda.


International Community Condemned
President Paul Kagame at the formal ten years commemoration of the Rwandan genocide condemned "the international community's failure… a convenient failure to take responsibility." President Kagame led conference participants on a tour of massacre sites including the churches in Nyamata and Ntarama where 15,000 people were slaughtered in the sanctuaries where they had sought refuge.


Remembered Victims
The cemetery at Nynaza was another place visited. The cemetery contains the graves of 3,500 people who were massacred after being abandoned in a schoolyard by UN peacekeepers.

Liberal Church Participation
The Holocaust in Rwanda book is unique in that it examines the disgraceful involvement of liberal church leaders, gun control and media manipulation. Rwanda was a gun free zone. The mass murderers successfully manipulated and abused the media to vilify the targeted Tutsis, and to mobilise masses of Hutus to kill their neighbours. The scandalous role of the French government in providing assistance, training and weapons to the mass murderers, and even the French military expedition to create a safe zone for the fleeing Hutu mass murderers, providing sanctuary even for many of the architects of the genocide is also revealed in this book.


Challenge to the Christian Church
In addition, Holocaust in Rwanda looks at the challenge the Rwandan holocaust presents to the Christian church. The killers did not merely kill people in churches, they killed church workers - pastors, ministers, priests and nuns. However, the most shocking aspect of the anti-Christian mass murders was how many people responsible for the slaughter were trusted members of the congregations. On many occasions even priests, nuns and ministers were directly involved in the genocide! Several heads of denominations co-operated with the Interahamwe, by betraying their Tutsi congregations and co-workers into the hands of mass murderers.

The role of these Christian traitors, blood-stained bishops and murderous ministers of Rwanda are an indictment upon our theological seminaries and church councils. Those who do not wholeheartedly love the Lord Jesus Christ and His Word are not qualified to be spiritual leaders. The Rwandan Holocaust exposes the emptiness of the superficial and self-centred easy believism, which all too often masquerades as the Gospel. Compromise and cowardice helped cause the catastrophe. Most importantly, Holocaust In Rwanda looks at some of the lessons, which need to be learned in order to ensure that such atrocities do not reoccur. Far more important than the concerns for retribution is the urge and need to lay foundations for the future that will prevent such nationwide oppression from ever occurring again. These are Biblical principles which are not only important for Rwanda but for every society which values life and liberty. Holocaust in Rwanda concludes with the Biblical principles which had they been adhered to, there would have been no holocaust in Rwanda.

Also Available as an E-book on SmashWords 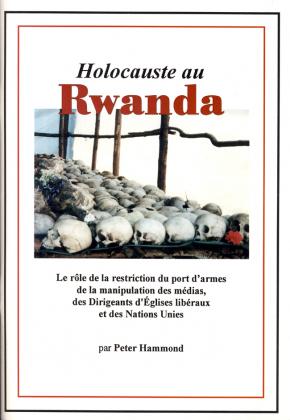 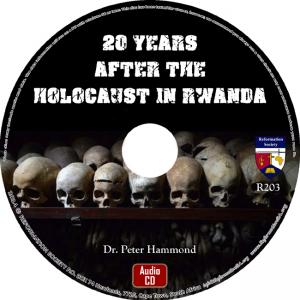