ALSO AVAILABLE AS AN E-BOOK

What would you do if armed terrorists broke into your church and started attacking your friends with automatic weapons in the middle of a worship service?

Would you be prepared to defend yourself and other innocents?

Would you be justified in doing so?

Is it time for church-goers to consider such once-unthinkable possibilities?

There is one man in the world who can address these questions with first-hand experience.

His name is Charl van Wyk – a South African who was faced with just such a shocking scenario.

In "Shooting Back: The Right and Duty of Self-Defence," Van Wyk makes a Biblical, Christian case for individuals arming themselves with guns, and does so more persuasively than perhaps any other author because he found himself in a church attacked by terrorists.

"Grenades were exploding in flashes of light. Pews shattered under the blasts, sending splinters flying through the air," he recalls of the July 25, 1993, St. James Church Massacre. "An automatic assault rifle was being fired and was fast ripping the pews - and whoever, whatever was in its trajectory - to pieces. We were being attacked!"

But Van Wyk was not defenceless that day. Had he been unarmed like the other congregants, the slaughter would have been much worse.

"Instinctively, I knelt down behind the bench in front of me and pulled out my .38 special snub-nosed revolver, which I always carried with me," he writes in "Shooting Back," a book being published for the first time in America by WND Books. "I would have felt undressed without it. Many people could not understand why I would carry a firearm into a church service, but I argued that this was a particularly dangerous time in South Africa."

During that Sunday evening service, the terrorists, wielding automatic assault rifles and grenades, killed 11 and wounded 53. But the fact that one man – Van Wyk – fired back, wounding one of the attackers drove the others away.

Those killed that day were:

The last four were Russian seamen attending the service as part of a church outreach program. Another Russian seaman, Dmitri Makogon, lost both legs and an arm in the attack.

Using his personal and high-profile story as a launch-pad, Van Wyk wrote "Shooting Back" – which instantly became a South African bestseller, as well as a bestseller for WND, which imported thousands of copies of the original book for sale online to audiences in the U.S. and around the world.

But it was always a challenge maintaining supplies to meet the demand.

This is the first time this book, previously published in South Africa, has been widely available in the U.S. and elsewhere.

"I am honoured to be a part of this historic undertaking – the republishing of this classic work in the United States," said Joseph Farah, founder of WND Books and editor and chief executive officer of WND. "We have been working on this for more than three years. Now everyone can read this amazing and important story, which has applications in terror-stricken America and for Christians and Jews throughout the world."

Far from being just a reliving of the tragedy of the St. James Church Massacre, "Shooting Back" is a thorough examination of the whole issue of armed self-defence from a Christian perspective.

It deals with burning questions that plague all conscience-driven people:

Using the Bible as his guidepost, Van Wyk makes the case that Christians not only have the right but the duty to defend themselves and other innocents from such aggression.

“As Van Wyk’s experience illustrates, no place is totally safe — not even a church," explains Larry Pratt, executive director of Gun Owners of America, who wrote the foreword to the book. "The notion that declaring an area to be gun-free, will keep criminals from maliciously using guns is ludicrous. Any law that makes self-defence illegal or impractical is an illegitimate law, because such a law ultimately subjects people to the criminal element. I hope that Charl van Wyk’s book will help turn the tide. South Africans – and people everywhere – need to refuse to support any laws that leave them defenceless against murderers, robbers, rapists and arsonists."

But this amazing true story doesn't end there. It's also about redemption and reconciliation. Several of the church members who were injured or who lost family members in the attacks, as well as Van Wyk, later met with and forgave some of their repentant attackers.

ALSO AVAILABLE AS AN E-BOOK 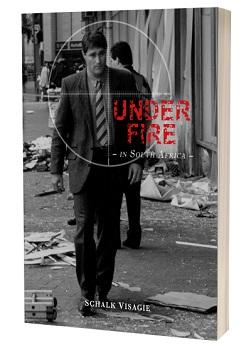