At school in Rhodesia, I found myself often at loggerheads with other students and some of the teachers because I supported the Boers and argued that Britain was the aggressor in both Anglo-Boer Wars. That was not a popular position to take for an English-speaking student, in a Rhodesian school. At Milton Junior and Milton High Schools in Bulawayo the principals proudly proclaimed that we Rhodesians were "more British than the British!" Our textbooks all came from England and their perceptions of South African History was, in my opinion, unbalanced and unfair.

You Are What You Read

At that stage in my life, I did not know any Afrikaans people. None of our family friends were Afrikaans. However, I had a love of reading and was a regular visitor to the Bulawayo Library. The Washing of the Spears, by Donald Morris; Hill of Doves, by Stuart Cloete; The First Boer War, by Joseph Lehmann; Commando, by Deneys Reitz, convinced me of the fighting qualities of the Boers and that we had been on the wrong side in those wars.

My Father fought all six years of the Second World War in the Royal Artillery, mostly in the Eighth Army, much of that in the North African desert. His high respect for Field Marshall Erwin Rommel and the German Afrika Korps and disdain for Hollywood war films which distort what really happened, also influenced my critical assessment of the mass media.

My brother served in the Rhodesian Army. I was too young for that war. When my call-up came, it was to the South African Infantry. My respect for the fighting abilities of Afrikaans soldiers soared even higher as I had the privilege of being part of the SADF's Resistance to communist terrorism and Soviet expansionism. The first Mission I served under, Hospital Christian Fellowship, was mostly staffed by Afrikaans Missionaries and my love for the Afrikaans people and their faith deepened and grew

In over 34 years in Missions, I have travelled and ministered in 36 countries across four continents. My missionary service has enabled me to meet extraordinary people, including key role players in 20th century history. For the last 20 years of his life, I had the opportunity of regularly meeting with Ian Smith, the last Prime Minister of Rhodesia. He confided in me his conviction that we had fought on the wrong side in the Anglo-Boer War and in the World Wars. Ian Smith said to me that we should never have attacked our friends and neighbours in the Transvaal. The Boers were never our enemies and Britain's only interest in the Transvaal was its gold.

The Benefit of Hindsight

He also stated that it was a pity that Rhodesia did not vote to become the fifth province of South Africa in the 1923 Referendum. South Africa would have immeasurably aided in the defence of Rhodesia and Rhodesia could have moderated the policies of South Africa. Rhodesia stood for a qualified franchise requiring education, or property ownership, without concerns of race, for the voters roll.

In my younger years I met with people who had been part of the Pioneer Column in 1890 that had first settled Rhodesia. Men who had fought in the Matabele War of 1893, Commandos who had ridden with General de Wet and Marthinus Steyn during the Anglo-Boer War, survivors of the British concentration camps during the Anglo-Boer War, veterans of the First World War and of the Second World War, and survivors of the Soviet Gulag.

Legends of Our Time

I have had the privilege of learning first hand from Colonel Jan Breytenbach, one of the first South African Parabats, the Founder of the South African Reconnaissance Commando, 32 Battalion, and 44 Parachute Battalion. As the most combat decorated military veteran in recent South African history, Colonel Breytenbach is a treasure-trove of insights and information. General Constand Viljoen, who was Chief of the Army when I was serving in the Infantry and later, Chief of the Defence Force, has been a guest in our home.

Professor Fritz Haus, my mentor at Theological College, was a student of Carl Hugo Gutsche, the pioneer Missionary to South Africa. Rev. Erlo Stegen, the Missionary to the Zulus, whose labours have been abundantly blessed with the most extraordinary Revival in the history of KwaZulu, has taught me much about the history of these brave and proud people.

I have been the guest of Dr. Gatsha Buthelezi at his prayer meetings in KZN. By God's grace, I had the opportunity to meet and learn first-hand from President P.W. Botha. I have met President F.W. de Klerk on a number of occasions, and was summoned by President Nelson Mandela, after mobilising tens-of-thousands of people in protest to Parliament over his policies to legalise abortion, pornography, prostitution and perversion.

As my wife, Lenora, and I, sought to home educate our children, we were impressed with many of the tremendous educational resources available. However, I found most of the history textbooks offered by Christian suppliers most disappointing, inadequate and, in some cases, dangerously deceptive. As I corrected textbooks on matters of fact, my daughter asked how I could cross things out in the textbook and write in the margin different dates, facts and information. "How can the textbook be wrong?" Well, evidently the people writing these textbooks could have had no first-hand knowledge of the subjects they were dealing with!

I had served in the South African Army. I knew South West Africa and Angola intimately. From 1982, I travelled widely across the killing fields of Mozambique. I walked amidst the thousands of corpses in the aftermath of the Holocaust in Rwanda. I know Matabeleland. I grew up amongst the Matabele. I have many dear Zulu friends. I have regularly visited most of the battle sites, monuments and museums in South Africa. I have accumulated hundreds of history books on South Africa, including first editions from previous centuries.

Today all too many people's source of information is from the internet. That can be good or bad, depending on the source. However, primary source documents, first edition books from the actual eye-witnesses who are contemporary with events in question are always to be trusted above the modern mass media, Hollywood and politically correct fashions and fads promote!

Learn the History They Do Not Teach in State Schools

Now we praise God that this long-standing project of Sketches from South African History (a 208 page book with 185 pictures and maps), is available as a book and the accompanying South African History Audio and Data MP3 Boxset includes 20 audio lectures, 15 PowerPoint presentations and PDF versions of this book, in both English and Afrikaans.

These and other of our history books, such as The Greatest Century of Missions, The Greatest Century of Reformation, Victorious Christians - Who Changed the World, A Christian History of Africa, and Church History Manual are available from: Christian Liberty Books, PO Box 358, Howard Place 7450, Cape Town, South Africa, tel: 021-689-7478, email: admin@christianlibertybooks.co.za. 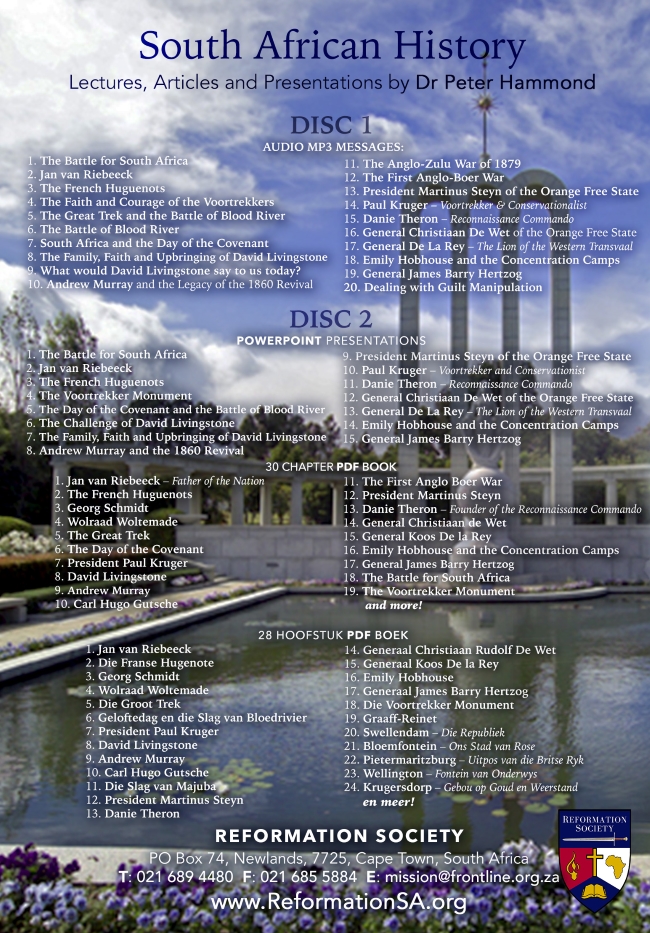